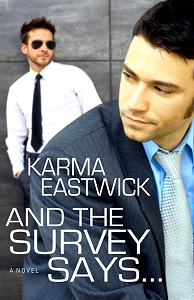 Project Director Zane Caldwell has a major problem—a charming, go-getter hotshot from Chicago named Ford Trionni, recently hired at Widdley Finch Inc., a Connecticut-based marketing research company. The man, whom the secretarial pool nicknamed “The Italian Stallion” based on his stunning good looks and sexual aura, has also gained the reputation of a superstar in the industry due to his innovative analytical techniques. The trouble is, the man wears his accolades like a badge on his lapel, strutting around the office like a peacock.

Ford’s self-centered, lofty attitude drives Zane to utter distraction. Even worse, the man seems to know it, intentionally using his sizzling sex appeal to tie Zane’s patience and libido into knots while giving off mixed messages of mutual attraction. But from what Zane can tell, Ford’s already involved in an intense relationship with someone else, and the last thing Zane wants is to fall for a guy who not only treats him like a peon instead of an equal, but intends to make him a side dish to his current love affair.

Yet as he works with Ford on an important account, Zane begins to realize there’s more to Ford than the man lets on, and all may not be what it seems. As the heat between them builds into an inferno despite their contrary work relationship, Zane vows to get to the bottom of Ford’s confusing behavior once and for all. Is the man playing games with Zane’s job and his heart, or is there a chance they might actually discover they’re the perfect partners?

“…I liked both Zane and Ford and the office romance storyline was entertaining. I also enjoyed the moments of humor throughout the story…Solid writing, well-drawn characters and an interesting storyline that includes a subject not often found in romance books, which to avoid spoiling the story for others I’m not revealing, made this an entertaining read.”–Lily, Rainbow Reviews

“5 Stars!…Rarely does one find a story with laugh-out-loud character-driven humor, two likeable and sexy protagonists, scorching sexual encounters, and a touch of drama revolving around a subject matter I’ve never seen featured in a gay romance novel, all neatly bound in an extremely well-written package…The secondary characters are equally humorous, especially Mallory, Zane’s efficient assistant and sparring partner, who pulls no punches when dealing with her lovable boss as he struggles to ride an emotional roller-coaster and fight his bad habits…The sensitivity the author uses in handling the unique subplot–the reason behind Ford’s overall attitude and confusing behavior–is highly commendable, and the frank dialogue regarding recent political hot-button issues and accompanying hypocrisy gave the story additional realism…If you love office romances with hot M/M sex, along with witty dialogue and unique subplots while shedding a tear or two along the way, you won’t want to miss this novel. By the final chapter I had fallen in love with both characters, and you may also…Fun and refreshing!”–Dan, Diamond D’s

I had been the first to arrive in my department, turning on the main lights before I cut a path to my office. Shortly thereafter, with my bladder begging to purge the coffee I’d purchased at my local convenience store, I’d headed into the men’s room. Although I hadn’t been surprised when someone entered a few seconds later—I certainly wasn’t the only project director who routinely popped into work early—I was, however, taken aback to see Ford’s handsome face smiling at me. Coincidence, or had he followed me in here? I wondered. I couldn’t help but think the latter true, because he didn’t sidle up to one of the countless gleaming urinals standing free, but the one directly to my left. Talk about an invasion of personal space, not to mention a lack of restroom etiquette. I didn’t know whether I should feel insulted or flattered.

I had to admit, he looked so goddamned sexy in his slate-gray suit, with a form-fitting cranberry-colored shirt and black-and-white striped tie, but his insufferable smirk ruined the effect for me. Still, before he turned his face toward the blue tile wall, his moist lips caught my attention, and I tried to fathom what he had meant by his words. Could it be what I thought?

My gaze shifted downward and to the left, stealthily, almost as if my eyes had been conditioned to do so from all the years I’d spent frequenting gay bars and checking out cocks of potential lovers in restrooms. And what I saw now was one hell of a beautiful penis. The nickname Italian Stallion seemed quite apt, I decided, as I studied the fat, uncut dick he held in his hands. Similar to mine, and about the same length. And just the kind of cock I loved to suck.

I refocused my attention on the wall. “Excuse me? What did you say?”

“I didn’t think anyone else would be here so early.”

I couldn’t help but experience sharp disappointment that he hadn’t made the “impressive” remark about my cock. Or rather, that he didn’t actually admit what I still thought might be true. I kept my gaze forward. “I wanted to get a jumpstart on the week, especially when I have a major presentation due at the end of the month.”

“Oh? You have a major presentation?” As opposed to the one sticking out of your slacks? my renegade tongue ached to clarify. “Since when?”

“No, I always like to get an early start. I find I can accomplish more work when the office is quiet.”

And you can display your superiority to the bosses, no doubt, by beating them into the office and pretending to be a workaholic when you’re really just making personal calls. “Uh-huh.”

Suddenly, my peripheral vision caught him glancing toward me, and my honed instincts, again from all those years pissing in gay cruising joints, told me he definitely wasn’t looking at anything other than my cock.

I snapped my head to the left and caught him off guard. His gaze instantly leapt up to my own and the hint of crimson filled his cheeks. I wondered how much more color I could add to his face if I reached over and fondled his dick, or spun toward him and asked if he wanted to suck me off.

“Nice suit,” he finally said, his head once again turning toward the wall. “Armani?”

I felt myself growing hard, probably because I had stopped pissing moments earlier and was doing nothing now but milking my dick just for fun, delaying the need to return it to my pants. Once again, I glanced toward his groin, and saw that his shaft had also started to lengthen as he squeezed out the last drops of urine. Which one of us would break first? I pondered. Which one of us would turn toward the other and put on a lewd show, displaying his burgeoning assets? And wouldn’t Mallory with her “Zord” obsession have a joyous time witnessing this whole little scene?

The last notion rocketed me back to my senses. I stuffed my cock into my trousers, then zipped up. At the wash basin, I hastily cleaned my hands, drying them on a paper towel even as Ford came to the sinks to join me.

“Hey, regarding what happened last Friday, I’m sorry about that.”

“You already apologized. Hope you didn’t lose any sleep over it.”

“So, Zane, let me ask you something,” he said, his voice dropping to a low, hesitant whisper. “I wondered if…if maybe you might—?”

“Can’t now. Gotta run. See you later,” I said nonchalantly over my shoulder and headed out the door.

As the bathroom door shut behind me, I could have sworn I heard regret in his last words. And I would certainly know what that sounded like, because a huge part of me felt the same emotion. Regret for not letting him finish his question, which I sensed had nothing to do with business. And additional regret for not seeing what might have happened had I stayed at the urinal. Damn, I hated regret…